Can creativity be templated?

Yes it can, according to a team of Israeli researchers.

The researchers studied 200 ads that had been award winners or finalists in top advertising competitions. The researchers found that nearly nine in 10 of the ads could be classified into six templates.

Next, they studied 200 less successful ads — those that had not earned awards. The researchers found that only 2.5% of those ads could be classified into templates.

‘All creative ads resemble each other …’

“The surprising lesson of this story: Highly creative ads are more predictable than uncreative ones,” write Chip and Dan Heath in Made to Stick.

Traditionally, idea-generation techniques have focused on a lack of system and logic. We try to brainstorm as many different ideas as we can. We say, “there are no bad ideas.” We bring in diverse opinions through focus groups and free association.

But what if we’re wrong?

A better approach, according to the Israeli researchers, is to identify patterns in successful communications and brainstorm ways to implement those patterns.

This approach itself follows a pattern in creative thinking.

The researchers found that nearly nine in 10 of the ads could be classified into six templates.

Next time you’re developing a creative campaign, use these proven templates to jump-start your ideas:

Why reinvent the wheel?

Call it thinking inside the box: The irony is that frameworks, formulas and templates like these can actually help you come up with more effective creative ideas than “free-thinking” techniques.

What templates could you use to make your messages more creative?

Chip Heath and Dan Heath, Made to Stick: Why Some Ideas Survive and Others Die, Random House, 2007

Work with — not against — your brain

While we talk a lot about what to write — More stories! Fewer words! Shorter sentences! — we don’t focus so much on how. 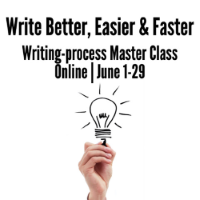 Writing is hard because we weren’t taught how to write. Instead, we were taught how to edit: how to spell, punctuate and use the right grammar.

But there is a how to writing. Learn a few simple steps that will make your writing time more effective and efficient at How to write Better, Easier & Faster — our writing-process workshop starting June 1.

You’ll learn to invest your time where it’ll do you the most good … stop committing creative incest … even save time by editing before writing.